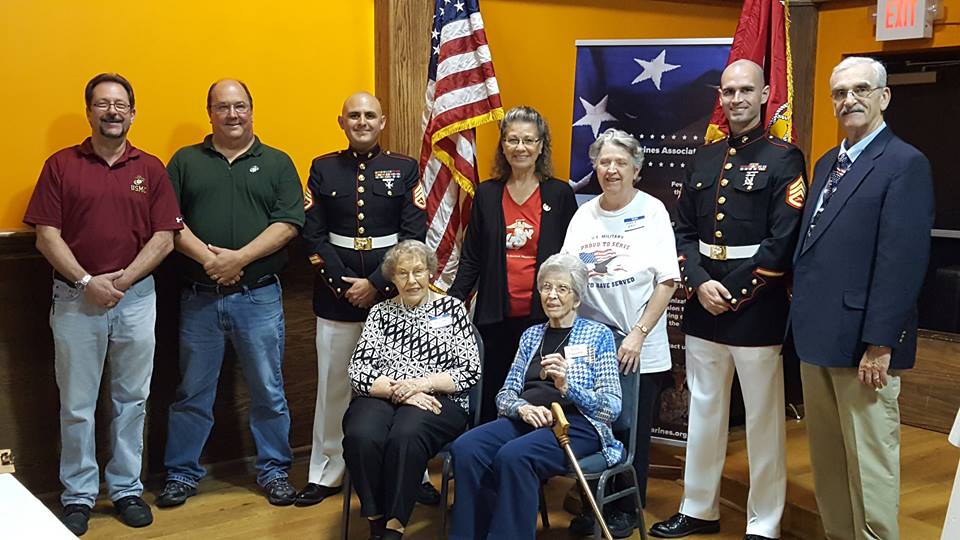 It took 71 years for the World War II Victory Medal to finally be awarded to Mary “Polly” Paquette. Saturday, September 16, I had the honor of escorting fellow Marine Polly Paquette to the presentation ceremony. This event was made possible by the Area I Director of the Women Marines Association. “We take care of our own and attempt to locate Women Marines of World War II who are not aware that they are recipients of this award” stated the Area 1 Director Jamie DePaola, a retired USMC Sergeant Major. One other Marine being presented the medal was Mrs. Martha Potter from Concord NH.

The Marine Corps Women’s Reserve was established in February 1943 after being disbanded at the end of World War I. Polly enlisted in December of that year. The saying at the time was that for every woman that enlisted, a man would be free for combat. Unaware of this, Polly enlisted in the Marines out of a sense of duty for her country, never wanting or expecting any awards or special recognition for her patriotic duty. Many other women answered the call to duty in other ways by joining the ranks of Rosie the Riveter. They increased the number of working American women from 12 million to 20 million by 1944, a 57% increase from 1940.

The Wolrd War II Victory Medal was authorized by the President in 1946 when the war was officially at its end. Though the war, for the most part, was over in 1945, far too many military personnel had left the service, gone home; and were/are unaware of the award they had earned.

The front of the medal depicts the Liberty figure resting her right foot on a war god’s helmet with the hilt of a broken sword in her right hand and the broken blade in her left hand. The reverse contains the words, “FREEDOM FROM FEAR AND WANT,  FREEDOM OF SPEECH AND RELIGION, and UNITED STATES OF AMERICA 1941-1945.” The red center stripe of the ribbon is symbolic of Mars, the God of War, representing both courage and fortitude. The twin rainbow stripes, suggested by the World War I Victory Medal, allude to the peach following a storm. A narrow white stripe separated the center red stripe from each rainbow pattern on both sides of the ribbon. The World War II Victory Medal provides deserving recognition to all of America’s veterans who served during World War II.

After the presentation at the Southside Tavern of Manchester, we enjoyed a nice lunch and some interesting conversation with all the other Marines present.

Congratulations to Polly from RiverWoods Manchester!