Meet a fitness inspiration and shining star, Janet Prochilo. In her previous home, Janet fell down four times in one week. Since moving to the safety and security of RiverWoods Manchester, she has not fallen once.  For more than five years, her left leg would give out without warning.  This was due to inconsistent rehabilitation and physical / strength training programs following a stroke.

Working with Fitness Coordinator Bernadette Stephens, Janet began a regimen to strengthen her legs. Beginning with the stationary bike for five minutes each session, she saw immediate results. Each week she adds one minute, currently biking 25 minutes.

Janet’s fitness plan also includes time on the new rowing machine every other day and a number of classes including Tai Ji Quan for balance, Dance Steps, Yoga and Sit and Be Fit utilizing free weights.  At eighty eight years old, she recently clocked 450 minutes of physical activity in one week, breezing past the suggested guideline of 150 minutes. “I just love the variety of classes, the instructors and the fun we have laughing and getting stronger together,” Janet smiles. 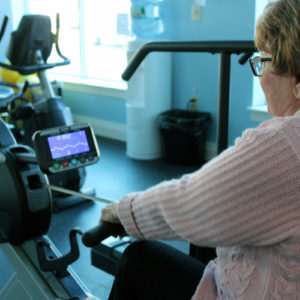 Additional improvements she raves about are:

In addition to her strength efforts Janet loves being involved in community programs like a knitting group that makes outerwear donating to those in need.  She is a member of the Pen Pal program with a local school, enjoys the numerous community concerts, sing-a-longs, game nights and watercolor class.

Janet shares, “RiverWoods Manchester is a hidden gem.  The minute I got in here, I knew this was the place for me.  It is so homey and everyone is so friendly, always saying hello.”  RiverWoods Manchester has simplified Janet’s life allowing her to focus on improving her health and eliminating worries about her future healthcare needs.

Schedule a tour to see the fitness center at RiverWoods Manchester